Our curriculum for computing is broken down into 4 main areas. They are:

We cover a variety of these areas as we progress through the school.

Look at what we learn in computing ... 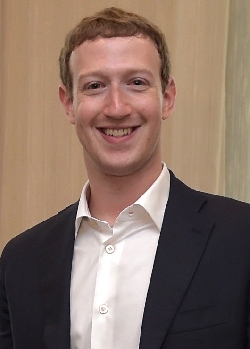 Mark Elliot Zuckerberg was born May 14, 1984. He is an American computer programmer and Internet entrepreneur. He is a co-founder of Facebook, and currently operates as its chairman and chief executive officer. His net worth is estimated to be US $74.2 billion as of November 2017, and in 2016 was ranked by Forbes as the fifth richest person in the world.

Zuckerberg launched Facebook from his University dormitory room on February 4, 2004. He was assisted by his college roommates and fellow Harvard students Eduardo Saverin, Andrew McCollum, Dustin Moskovitz and Chris Hughes. The group was set up initially to allow students to share research and tips on their homework. The group then introduced Facebook to other college campuses. Facebook expanded rapidly, and went worldwide reaching one billion users by 2012.

Since 2010, Time magazine has named Zuckerberg among the 100 wealthiest and most influential people in the world as a part of its Person of the Year award. In December 2016, Zuckerberg was ranked 10th on Forbes list of The World's Most Powerful People.